Katra, India is the gateway for pilgrims to the cave shrine of Mata Vaishno Devi, high in the picturesque Trikuta Mountains. The temple is visited by 5 million pilgrims each year making it the second most visited in India.

It is believed the Hindu Goddess fulfils whatever her devotees wish for. The town of Katra itself, in the northern Indian state of Jammu and Kashmir, has an abundance of natural beauty.

It’s a great summer retreat for those looking for a reprieve from the heat and the area is renown for its vegetarian cuisine.  There are plentiful hotels in Katra, as well as many other holy sites of interest.

This post is part of our series Discover Asia where you will find all our Asian family adventures.

How to get to Katra and Mata Vaishno Devi

Located 5200 feet above sea level, pilgrims start their trek or “yatra” from the base camp at Katra.  It is a 13.5km hike into the mountains to arrive at the temple by foot or horse.

Alternatively, there is also a helicopter option (1005rs) for those less able to walk that will take you as far as Shanjichhat, 2.5kms away.

There are also battery-operated cars (300rs) that take an alternative route from Ardhkuwari to Bhawan that the elderly or disabled can book for the last 6kms. Katra itself can be reached by air, train and road.

Note before visiting the shrine, you must have registered at the Yatri Registration Counter near to the Katra Bus Stand, a compulsory process with the Shrine Authority.

If you have no slip, you will be turned back at the checkpoints. This is to control the number of pilgrims or “Yatries” per day as the hillside has a limited capacity. The time to complete the trek really depends on individual fitness levels. It could take an adult between 4 to 10 hours.

“Yatries” are men, women and children of all ages, cultures, castes and languages with a devotion to the Goddess. Children are, of course, permitted to complete the Yatra with their families, albeit it’s a tough walk for small legs.

You may want to consider hiring a pony (near the start, if you wait until along the trek there may not be any left), or hiring a porter who will help carry the child. The other alternative is to take the helicopter.

LIKE THIS? WHY NOT TRY
24 Hours in Taipei for Families

Note that the helicopter flights must be booked through the Shrine Authority.  Slots for the helicopter go on sale at midnight, one month prior, so it essential to book immediately when they are available.

The temple is open to pilgrims throughout the year, but the best time to visit Katra is from March to October.

The winter months of November to February can be brutally cold, especially overnight and winds can be strong.  You will be rewarded with spectacular snow-capped mountain views, but it is best to time your visit in the warmer months when fewer layers of woollen clothing will be needed.

The most popular time to visit is for Navrati, the Hindu festival celebrated twice a year in March-April and September-October over 10 days.

Note during busy times you may not be issued your Yatri slip immediately and have to go into “waiting”.  This is particularly common at weekends during the busiest months. You can stay at a hotel in Katra during your waiting.

There are fewer pilgrims in the hot summer months due to the heat and humidity, however, yatra can still be performed at night arriving for “aarti” – the worship ceremony –  pre-dawn.  Many also like Katra, and the Jammu and Kashmir region for the fact it is so much cooler in the mountains than further south in India.

Other things to see and do near to Karta

f you still have the strength after the first temple, you can hike on a further 1.5km to this temple. It is at a higher altitude and a steep climb that can be undertaken by foot, pony or palanquins.  Legend goes that Bhairon Nath was killed by Vaishno Devi and as an apology was given the last link in the pilgrimage, where his head fell.

Also known as the Reasi Fort, is in the town of Reasi, 64kms north of Jammu. The fort includes a temple, pond and armoury and treasury. The armoury was later destroyed, and the treasury moved to Jammu.

A great summer spot for picnicking families, on the banks of Jhajjar rivulet.  There’s a cafeteria and tourist bungalow here. 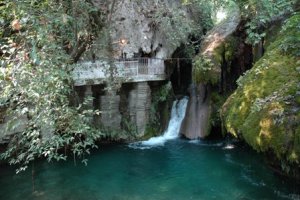 Where you will find not only a temple, there is a beautiful natural cave and waterfall with crystal clear waters (pictured). These are holy waters so you cannot bath here, but can do further downstream.

For the more intrepid traveller (ie this one is not family friendly!), the views of Tso Mosirir also called Lake Mountain, nestled in the Zanskar Valley are stunning.  There is accommodation by way of guest houses or homestays in the small village of Korzok.

Other things to know before visiting Katra

LIKE THIS? WHY NOT TRY
Dos and Don’ts Visiting South Korea

Have you been to Karta before?  Have you undertaken yatra with your kids?

Disclosures:  Images have been sourced from Wikicommons and Pixabay with credits as per image.   Our full disclosure policy can be found here.