After a busy summer of travels, its time we had a look again at some airline reviews.  We welcome to the blog today new blogger & family traveller Erin Bromfield who along with her husband and 8 month old baby have started an around the world adventure – you can see more on their blog Jet Set Munchkin.  Here she talks us through their trans-American experience flying United Airlines… with a Baby! 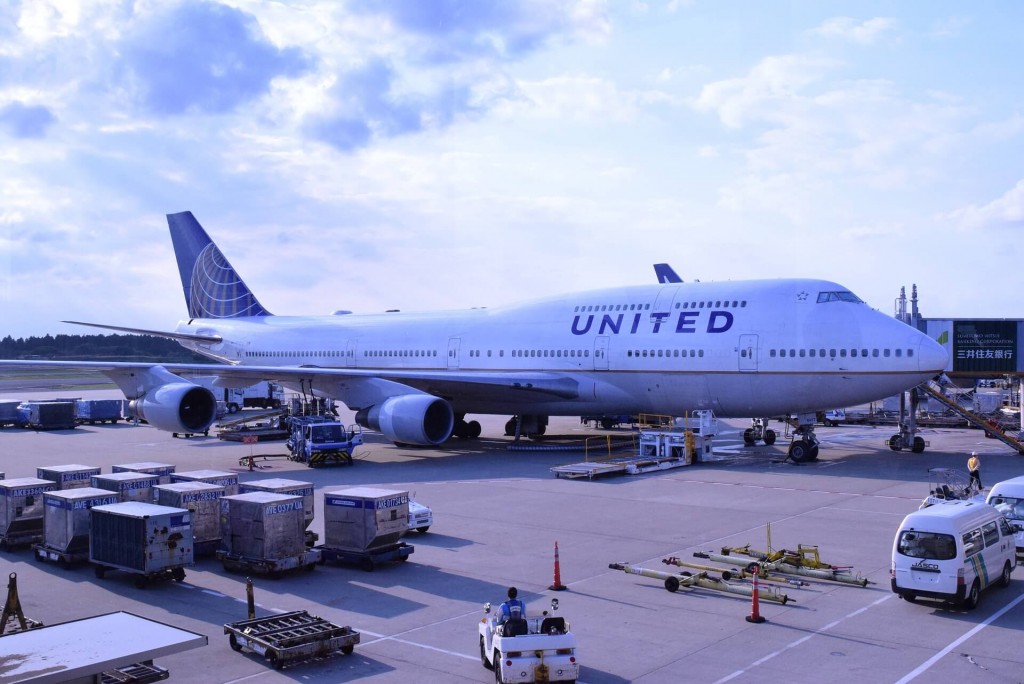 My husband and I flew United Airlines from New York (Newark airport) to San Francisco with a flight time of around five hours and thirty minutes. This flight was part of an around the world journey we are undertaking with our eight-month-old Munchkin using several different airlines.

If you’re thinking of flying United, my advice would be to go and have a stiff drink, sleep on it, repeat the mantra “what was I thinking?” 100 times and find an alternative carrier.

The check in process with United Airlines

The check in process was worse than the famed Hungarian budget carrier Wizzair. My glowing review of Wizzair can be found on my blog here. At least Wizzair a) don’t pretend to be anything but a bargain-basement no frills carrier and b) checked us in using a human being – quite a cheerful human being in fact.

United has effectively outsourced the entire check in process to the customer. I don’t mean just entering a reservation number at a kiosk and waiting for boarding passes to be printed. We needed to enter the reservation number, yes, and all of Munchkin’s details, our number of bags and whether they were overweight (without scales in sight), pay for our checked luggage, state whether we wanted to purchase additional services such as priority boarding and answer various other questions before printing our baggage tags and attaching them ourselves. The one United staff member on duty was busy running between check in kiosks and rolling her eyes at another customer who was having trouble printing baggage tags. There was no option to be checked in in person (unless we paid for priority check in and went to another floor). Picture completing these tasks with a tired Munchkin in the carrier and several pieces of luggage in a bright and noisy airport at 8am. Not the most fun start. I’m not sure whether I missed a seat selection option on the screen with all the bustle. Our boarding passes were printed without seat numbers but an instruction to see staff.

Does it improve at bag drop?

At bag drop, we were allowed to repack items from one overweight bag (3kg over) to another bag thus avoiding a US$200 excess baggage fee. We were told we could either go back to the self-serve kiosk, select “extraordinary items” and pay to check in our stroller, or check in our stroller at the gate. We chose the latter. We were told that no information about our seats would be given until we got to the gate.

Once we cleared security (shoes off, stroller folded up, baby water tested for chemicals etc), and found our gate post-haste, we were told we would not be sitting together. I explained that our travel agent had requested months in advance that we get front seats together, and was told I should have paid extra money for those seats in advance. After some stern words and a threat to feed Munchkin in the aisle on my part, and a return threat to put me on a later flight, a semi-kindly staff member found us seats together. In fact, the person seated next to us didn’t turn up so we ended up with three seats in a row in the end.

LIKE THIS? WHY NOT TRY
Which is the better airline Emirates v Etihad?

Priority boarding on United with a baby? We were not permitted priority boarding as we elected not to pay US$69 for the privilege. Over the course of this trip I am starting to take issue with airlines seeking to make money out of priority boarding. As a concept, priority boarding should be there for people who need a little extra time and space to board – not sold to the highest and able-bodied bidders. We were in the last of four groups permitted to board. Our bags and baby carrier were, as a result, stowed in multiple locations and disembarking took a little longer in San Francisco.

When we boarded, I asked whether someone would bring me an infant seat belt. A cheerful man replied in the affirmative and added that we would also receive an infant life jacket. We never saw that lovely man again. Turns out, United don’t provide infant seat belts, which I understand is the case for all airlines travelling within the US at the moment. The old style seat belts have apparently been prohibited by the relevant federal authority while new ones are yet to be approved. It was a very turbulent flight so I was holding onto the little one firmly at times.

The bag drop and cabin staff were very cheerful and friendly, which was admittedly a nice change after the open hostility from Bulgaria Air staff on a previous flight. Indeed, United staff must get priority boarding to be that cheerful! They really didn’t mind Munchkin cruising up and down the aisles with his father, smiling at other patrons, despite an announcement requesting passengers not loiter in areas such as the area around the toilets. Munchkin was in a very good mood for the entire flight which was fortunate for his frazzled parents.

Despite being a flight of over five hours, United didn’t provide any food for Munchkin so we used our own. Not a huge deal as we had a contingency plan, but I am surprised. They had a kids snack box for sale but aside from apple sauce the contents were suitable for older kids. For adults, they had snack boxes with excess packaging available for sale. If you have specific dietary requirements like dairy or gluten free, take your own food.

United did have pretty good in-flight entertainment and they did provide me with extra water for thirsty breastfeeding work when I asked. Overall it was not a disaster as our flight left on time with us on board, and our stroller and luggage awaited at the other end. That said, I will try not to fly United again as everything up until we were seated was just a little too stressful for my liking.

This airline gets average to poor reviews for a reason, and with fully booked flights I don’t see any incentive for them to up their game.

Want more airline reviews?  Head on over to our Flying with Kids homepage, one of the most comprehensive guides you’ll find on the net for travelling with babies, toddlers & kids Thanks to Erin for sharing her experience with United Airlines.  The Globetrotters have only taken limited internal flights with American domestic airlines and none of them were memorable. Except for the one with United where 1). Master J was never even issued a ticket despite booking so we couldn’t self-check in 2). We were finally ticketed to sit in 4 separate spots on the plane (with a 5, 3 & 1 year old); 3). Master L’s most treasured teddy got stranded at San Francisco airport; we weren’t allowed back to look for it, told to file a missing items report and of course its vanished into thin air. Not the best flight experience after you’ve already been in transit for 20 hours….

And what’s with the lack of child restraints too? We couldn’t believe this in such a “safety conscious” country children under 2 had no seat restraint at all.

As for lack of priority boarding for families with infants – SHAME.ON.YOU.UNITED!!!

See where United Airlines ranked in the 2016 Skytrax World Airline Awards (they are there, keep scrolling)

LIKE THIS? WHY NOT TRY
Garuda Indonesia Family Flying Airline Review

2 thoughts on “Flying United Airlines… with a Baby!”