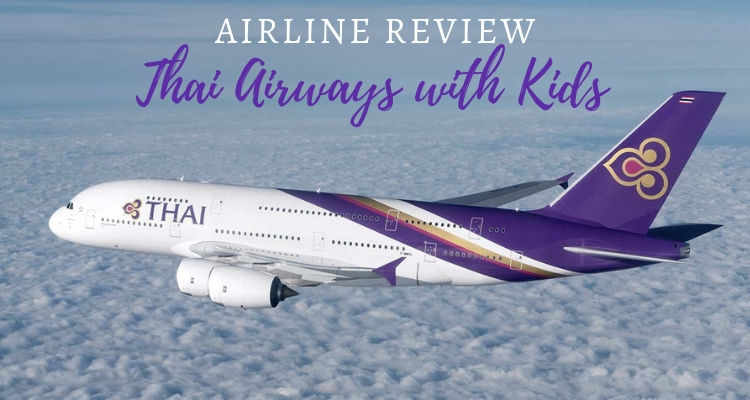 We welcome to the blog today Tina from Hangry By Nature sharing her family’s experience flying Thai Airways from Melbourne to Munich, via Bangkok

Let’s face it, Bangkok is always a good idea – with or without kids in tow. This is one of the main reasons why we choose to fly with Thai Airways, whether it’s to another destination in Asia or a super long haul to Europe, we just can’t resist a stop in Bangkok to let our tastebuds revel in tangy Thai street food and allow our two young kids to have the time of their lives exploring the city’s family attractions from aquariums to epic play centres.

Flying with Thai from Melbourne to Munich

On our most recent flight from Melbourne to Munich (via Bangkok), we flew on the Airbus A350 for the Bangkok stretch. Although it is an older aircraft, it is, nevertheless, very well-maintained and has all the entertainment you need to survive a long haul flight with kids allowing parents to come out reasonably sane.

Our flights for our family of 4 were booked directly via the Thai Airways website – sometimes it’s worth checking prices directly because we found an amazing sale fare. The process was simple, efficient and safe – our e-tickets were received within 5 minutes of completing the booking.

If you’re travelling with an infant, remember that you can’t check-in online and pre-select seats. This can only be done during check-in because the staff need to determine whether your infant requires a bassinet. But, one thing you can do is pre-book infant or kids’ meals, which I highly recommend doing, because (not gonna lie), they are packed with yummy snacks that even I wanted to get my hands on.

We stopped over in Bangkok for 2 days before we continued our onward journey to Munich (we probably wouldn’t have survived a 24-hour flight with wild toddlers), nevertheless, Suvarnabhumi Airport is still a big and modern airport to transit in with a diverse range of food options ranging from western food chains to traditional Thai cuisine. It’s an awesome airport if you’re planning for some retail therapy, but there’s not much in the way of entertainment for kids. There’s a tiny play space in the departure lounge, but I’ll be honest – not worth a visit.

If you can talk the hubby into minding the kids for an hour, there’s a massage parlour that offers full body and foot massages at relatively decent prices.  (OG: Awesome tip, thanks!!)

Check-in and pre-boarding with Thai Airways

Since having kids, we’ve made it a habit to arrive at airports 3 hours prior to departure, simply because we want a solid chance at scoring an empty seat for our then 11-month old who’s too big for the bassinet. The staff at Thai Airways are always extremely accommodating when it comes to parents travelling with kids. Of all the times we flew with Thai, I can only recall one time where they couldn’t provide us with a spare seat because the flight was overbooked.

LIKE THIS? WHY NOT TRY
15 Brilliant Beaches on the Gulf Coast, U.S.A.

If the staff at check-in are unable to reserve a spare seat for your infant – try again at the boarding gate. This happened to us on one of our flights and we were advised to enquire at the gate (which we did) and they were able to magically shuffle a few passengers around until we got a spare seat. Win!

The best thing about travelling with infants? You get to board first and snag a luggage compartment that’s actually above your seat. I mean, I know that travelling with kids can be a nightmare, but there are also some seriously good perks.

The Cabins and Seating Thai Airways

Thai Airways has one of our favourite seating configurations – 3 window seats on each side and 3 in the centre. I can’t speak for my husband because I ordered him to sit by the window with the 2 rascals, but I had a lovely flight sitting on the aisle next to a random stranger. Would I rather sit next to some random snoring stranger than my own kids? Heck, yes.

The airline also allows the use of inflatable leg rests, such as the Fly Tot or BedBox. Our kids slept soundly on the night flight without being sprawled all over my husband, which allowed him to get some much-needed shut-eye as well.

Service, entertainment and Food on Board Thai Airways

First things first – Thais love their kids. They look at my kids with the same kind of adoration I look at my doughnuts. In fact, at some point during the long and painful flight when I thought all hope of finding out whether Saroo finds his parents in the movie Lion was lost because the 1-year old decided to do a runner on the plane, the kind air hostess took him to the back and spoiled him with toys. Life was suddenly amazing for 15 whole minutes while I found out the ending to Lion.

Of course, Thai Airways didn’t skimp out on entertainment for kids – there’s a great collection of kids’ movies, popular series and games to choose from. Although, my kids were too young to make the most of the game offerings, mind-numbing repeats of Mickey Mouse Clubhouse and Peppa Pig kept them occupied for the most part while scoffed down my meal.

Looking for toys to keep your toddler occupied? Here’s what we pack

All sorrows aside, I have to say that I was very impressed with the kids’ and infant’s meals – so much, that I almost wanted to eat my toddler’s meal instead. His kids’ meal contained a Spaghetti Bolognese, apple juice, cookies, and a Milky Way bar. It took a lot of willpower to stop myself from eating the Milky Way.

I had pre-ordered an infant meal for our 11-month old which came with juice and pureed food packets containing sweet and savoury options.

Adult meals were tasty as well. We were given the choice between a spicy and authentic Green Curry and a western pasta dish that I didn’t take much fancy to considering that’s the only thing I ever cook at home because that’s as far as my cooking skills go.

The Family-Friendly Verdict for Thai Airways

Thai Airways, without a doubt, receives our tick of approval for child-friendliness. The kind, forever smiley and attentive staff kickstarted our trip on the right foot. If you’re not given colouring books and toys by the staff as soon as you’re settled into your seat, don’t be afraid to ask. Kids’ snacks are also readily available any time during the flight, you just simply have to call the attendant – ask and you shall receive.

LIKE THIS? WHY NOT TRY
5 things you should know before becoming a liveaboard family

Thanks to Tina for sharing her Thai Airways experience with us. You can follow more of their family travel adventures here on Instagram.

Have you had an experience flying long-haul with Thai Airways? We’d love to hear about your experience and any tips for fellow family travellers