As a fabulous addition to our family-friendly airline reviews, we will be publishing some first-hand reports on flying experiences with the world’s top airlines. 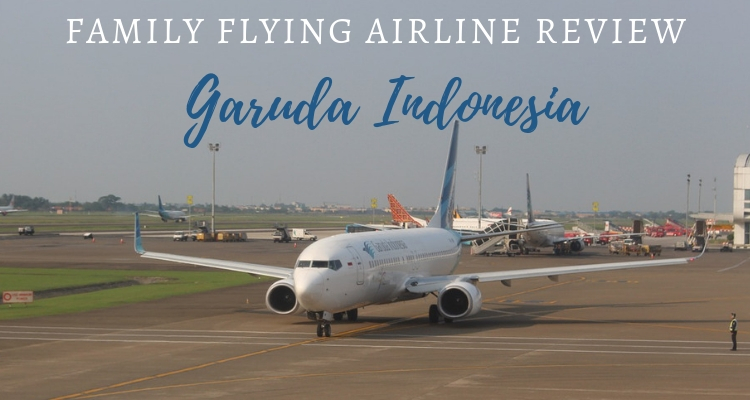 First up, one of our lovely readers from Melbourne, Deanne, provides us with an account of her recent flying adventure with her family to Bali, flying with Garuda Indonesia.

You can see our full airline review series here

My new year’s resolution was to finally get my children (boys aged 4 and 8) their passports. Once I had achieved this goal, the next logical step was to book an international trip.

In Australia, the isolation means that (apart from New Zealand) the closest international tourist destination is Nadi or Bali. We chose Bali.

What to look for when booking a family flight

A number of things are critical for me when travelling with children. The flight needs to be, whenever possible, direct. Secondly, I don’t mind paying a little extra to know that when I am on the plane essentials such as food, beverages and entertainment are standard.

We chose Garuda Indonesia, as despite some safety issues in the past, they have recently obtained the World’s Best Economy Class award from Skytrax. Garuda has a daily flight from Melbourne, Australia to Denpasar which takes 6 hours. The flight departs in the morning, with arrival in Bali early afternoon.

We decided to check in online and were all seated together. Garuda Indonesia flys A330 planes from Melbourne to Denpasar which has a 2-4-2 configuration. The four of us were seated in the middle.  Once we had arrived at the airport, we joined the standard queue, but later found out that there was a specific on-line check in counter. Despite this, check-in was quick, under 5 mins.

Arriving at the gate we learned that our flight was 2 hours late, due to the late arrival of the plane from Denpasar. This is typical of Garuda Indonesia, as I have noted this on numerous occasions in to and out of Melbourne.

Garuda Indonesia called for the plane to be boarded, and gave priority for people with infants, and business class passengers.

What to expect onboard Garuda Indonesia

Once onboard, there is enough room to store our hand luggage in the overhead compartments, as it appears most people checked luggage. There was also a good amount of legroom due to the 34” seat pitch.

I am impressed to find a water bottle and an amenity pack on each of our seats consisting of socks, eyeshade, and earplugs for the flight. Our headphones for the in-flight entertainment are already stowed in the magazine rack in front.

When we are finally in the air after the delay, we each log into the in-flight entertainment system and chose our preferred movie from a selection of 58 new release, blockbuster, family and international movies.  The entertainment system is not turned on until after we are in the air. For the children, there are about 10 children movies, in addition to age appropriate games. The movies are a little dated, with only one movie released in this current year.

LIKE THIS? WHY NOT TRY
Consider These Things Before Flying With Your Electric Skateboard

15 mins into the flight and we are offered nuts and a drink. There is not an option for children (or those that are allergic to nuts) which is surprising. Though, as soon as the drinks have been served, children meals are handed out. The food for the children is well presented and delicious. There is pasta, a fruit muffin, bean salad, cheese and crackers and cheesecake. Very tasty indeed! After this, the parents are served during the normal service.  Trays are quickly cleared 5 mins after the food service is completed.

Snacks are available at the back of the plane (nuts and potato chips), but the lunch is very filling and we don’t need anything.

1 hour out from Bali we are presented with an ice cream Weiss Bar (Mango). The entertainment system is turned off on the approach to Denpasar, which means that for the last 30 mins there is no entertainment.

Staff on the plane were professional and courteous and would attend to people’s needs quickly.

Returning from Bali to Melbourne on Garuda Indonesia

The return flight from Denpasar leaves at 11.30pm and returns to Melbourne at 7am. The return flight is 5.5 hours. When we travelled, other airlines from Australia had refused to fly the Bali-Australia route due to volcanic ash from the Mount Raung eruptions. Garuda Indonesia continued, except when the Denpasar airport was closed.

Check in at Denpasar was quick and efficient, which is probably due to the time of the day, and the few flights leaving that late in the evening. One very disappointing thing was that we were not seated together. When the airline was allocating the seats we were seated in two different rows, albeit behind each other. When we tried to rectify this, it was not possible for all of us to sit together.

Once onboard the plane, the children were presented with a Sumatran Tiger toy, which they cuddled the whole way home.

Once in the air, the children were presented with a muffin, while the adults again were offered nuts and a drink.  Then, despite the time of the night (after midnight), the lights were left on the plane for an extra hour. The cabin had been cleared of rubbish, but the lights still remained on. Luckily, my 4-year-old slept, but my 8-year-old had a lot of trouble sleeping because of the lights.

1.5 hours after we were due to land in Melbourne, breakfast was served. The children were asleep (thankfully!). The beautiful box their food came in was lovely and the food looked nice. They were served an egg omelette, sausage, milk, ham roll and fruit, along with milk. The meal was similar to the adult meal, which was tasty. Again, following the completion of the foodservice, trays were removed within 5 mins.

All in all, I am glad that we flew Garuda Indonesia, as they provided good service and little extras for the children.

Thanks to Deanne for this really detailed review of their recent experience flying with Garuda Indonesia.  Deanne booked her flights and pre-ordered kids meals through a travel agent. Due to fare class, they were not able to pre-book their preferred choice of seats.

Our Globetrotters is impressed that water bottles were provided at the start of the flight and clearing the trays away promptly is a huge help.  Delays are always disappointing and frustrating and not dimming the cabin lights on a night flight can be a parent’s nightmare!  A little more choice for kids on the in-flight entertainment system would be helpful, and perhaps providing more activities for the kids than just a soft toy.

If you would like to know more about services offered by Garuda Indonesia for families, including pregnancy and infant policies, don’t forget to check out our full family-friendly airline review.

LIKE THIS? WHY NOT TRY
Historical Places to Visit in the United States with Kids

Would you like to provide a family-friendly airline review?  Contact Keri at keri@ourglobetrotters.com for more details and you too can help other families decide which airlines might be right for their next overseas adventure.