Our Guest Blogger for this post is Matt from Tantrum Travels providing us with his views on flying with a family on Emirates Airlines. I have always believed Emirates to be one of the top in class when it comes to family air travel, as discussed in our airline review back in May 2015, but when Matt contacted me with his recent flying experience I was quite amazed at some of the service downfalls for his young family.  Taking us through the good, the bad and the ugly of a trip from Australia to Malta, via Dubai & Cyprus – with a 2.5-year-old and 10 week old, it’s over to Matt;

We have flown overseas with our eldest child a few times before, but this was our first with Emirates and two children. Our preference was to fly with QANTAS or a codeshare (as Emirates is) due to frequent flyer benefits. The timing of the Emirates flight to Dubai (9.10pm) suited us perfectly (Big tantrum tends to sleep well on flights) and on the QANTAS website, the connection to Malta appeared direct (whereas in reality, it was Dubai-Cyprus-Malta). It was a great holiday, but unfortunately, the flights are ones we are not going to forget quickly – I’ll explain why:

In retrospect, the first difficulty in our trip probably stemmed from booking our flights via QANTAS. We did this to earn frequent flyer points and earn status points. What we didn’t realise was how little control QANTAS have over the flight (seating, passengers etc). When we booked our 10 week old wasn’t yet born. We were advised to book for the existing three of us, and add the infant once he was born (as they needed an exact date of birth and name). At about day 2 of age, we were on the phone to QANTAS confirming his ticket as well as confirming bassinet seats on all legs. QANTAS had some difficulty doing this and had us on hold many times whilst they talked directly to Emirates. However, we successfully (or so we thought) added him to our booking.

The mystery of the bassinet seat (not exclusively for infants)

Emirates clearly states bassinet seats are a first in first served facility. This concerned us, as until Little Tantrum was born, we couldn’t reserve his seat, so we made it our mission as soon as he was born to ensure we had one. This included calls to QANTAS as outlined above as well as directly calling Emirates. We called as although you can request seats online, we were unable to reserve seats together with a bassinet seat. The difference, we now understand, is unlike QANTAS who don’t allow customers to reserve bulkhead seating unless they have infants, anyone flying Emirates can book the seat (the first in first served isn’t exclusive to those flying with infants).

We arrived at Sydney >3hrs before our flight and were quickly served to check in. However, we spend more than 45 mins at the desk whilst the poor attendant needed to make multiple phone calls to correct/add on/repair the incorrect addition of our youngest son to our travel. She was able to provide us with seating altogether and with a bulkhead (bassinet) and advised us this would be the case for all our flight (if only). 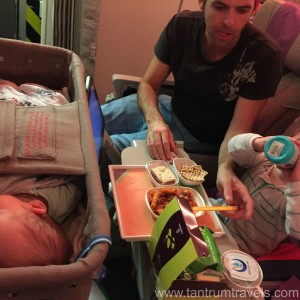 This leg, our first, was by far the best leg of our trip. We travelled on a relatively new A380 (3-4-3 seating), it was large, spacious and comfortable. Unfortunately, there are some design flaws in the seating of the bassinet seats on the Emirates version A380. Once the bassinet seat is up (which we had up the entire flight, as Little Tantrum slept the entire way) there is no way to access the entertainment screens as the bassinet obstructs their movement. If the screen is up, it is almost impossible to move out from the window seat to use the toilet.

Also, due to the positioning of the entertainment screens (being folded under the side of the seat), the seat arm rests do not raise. Travelling with a toddler this meant he had to sleep on top of us, instead of lifting the arm rest and lying across us as we have done many times previously. We have been on other carriers where this, and a bassinet have been possible.

That said though, both children slept well, we (the parents) even slept some. Big tantrum watched his selection of Disney movies and was given a bag (which he now takes everywhere) and a great erasable drawing toy – winners. The meals were no more impressive or bad than any other economy airline, but the removal of tray did seem to take a really, really long time (I know this time seems to extend once you have kids on your lap).

We had a relatively brief connection of just over 2 hours, which given how big Dubai airport is, is not that long. We had to change terminals which takes about 30 mins and recheck through security. We were lucky enough to use a lounge briefly and have a shower and clean up before boarding our next flight.

On our second leg, from Dubai to Malta we were not given a bassinet seat!!!

We were seated in the middle of the cabin, midway up and my wife felt like passengers were continuously turning around to stare at her as she breastfed our child. We spoke to the cabin crew, who attempted to help, but were unable to move us until after some passengers had disembarked in Cyprus. However, the bulkheads were NOT filled with people travelling with infants or children. This distressed us greatly, as we had gone to great efforts to ensure we had arranged a bassinet seat.

Sadly, after a great trip in Malta, the worst of our flying experience was still yet to come…

Check in was smooth and we were given both access to the lounge and our boarding passes or our connecting flight from Dubai. We did immediately note when we received our tickets however that I was seated in a completely different part of the cabin to my wife and children. We asked for this to be fixed (I cannot explain how difficult it is to keep a 2 year old quiet and settled whilst attending to a 10 week old when you are not sitting next to him – and he is constantly wanting to move to the other parent). Unfortunately, the flight was full, and we were told there was little that could be done. Another complaint later and I was moved to the seat next to, but across the aisle from my wife which was the best outcome as the middle seats in the bulkhead were occupied by families with infants.

The lounge was small, but comfortable and provided us with a nice selection of drinks and snacks whilst we waited.

Our two children had been pretty good flyers but it was this leg that was probably the worst of the four. They were unsettled, Big Tantrum didn’t want to sit in his seat for take-off and Little Tantrum was a bit miserable. They were tried, it had been a big and active holiday. Thankfully one of the attendants gave us an extra infant seat belt and I sat in Big Tantrum’s seat with him on my lap which improved things. There was a delay in leaving and a passenger from elsewhere in the cabin moved into my temporarily empty seat. This upset my wife, who alerted the flight attendants, who said it was unoccupied. We explained it was not, it was only for take-off and showed our boarding passes, but we had to argue insistently for the passenger to return to their seat. Having paid over $2000 for Big Tantrums seat (as he is over 2 years old), we found needing to fight for our seat very unprofessional.

As with the EK 107 flight over, the plane lands in Cyprus but you do not disembark the plane. This means waiting around for about an hour  – which is just more difficult with children and also means another take-off and landing to deal with. In retrospect we would investigate more direct flight options next time.

And finally, the final leg: Inflight (A380 Dubai – Sydney)

The last leg of the journey, so close, but yet so far. We rushed through Dubai airport, this time with an even shorter stopover to get to the gate just at the last call for boarding. However, we couldn’t board – as (and remember, we had boarding passes from Malta) Little Tantrum wasn’t on the flight list!!

After some time we were provided with seat – in different sections of the cabin and without a bassinet – by this stage, Mrs Tantrum was about to have a tantrum and refused to get on the plane. The ground crew at Dubai were completely uninterested in her cause, though, and made no efforts to try and help us. We were weary, and making the best efforts we could to keep our children well behaved but we needed to sit together with a bassinet.

Eventually, we boarded (with it felt like, the whole plane watching) and a crew member asked Mrs Tantrum if she was alright. She expressed her concern and (he was our saviour) this crew member was able to shuffle some passengers and sit us together in a bulkhead!!

From here the next 9 hours of our 14-hour flight were fantastic. The children slept, the food was good, space was large – we were happy. But… a passenger on the plane was not okay and Mrs Tantrum got called away to help. After some time, she returned and sadly the news was not good. There had been a death on the plane. The crew were flustered, understandably, but somehow the window was moved to sit next to us (with 2 children under 3) and my wife felt she had to make small talk for the remaining 3 hours of the journey. I feel this was entirely inappropriate and only increased the burden on us who already felt that we needed to keep our children settled.

LIKE THIS? WHY NOT TRY
Air New Zealand Skycouch Review

All in all, we didn’t enjoy our flights with Emirates, mostly as we felt they didn’t appreciate the increased needs of a family travelling with young children. We don’t think requesting a bassinet and sitting together is a big ask, as it greatly increases our ability to keep our children quiet and therefore the flight better for ALL other passengers.

**More on Flying with Emirates with Kids**

Disclaimer: We did write two complaint letters to Emirates who did not reply, however, we did receive a reply from QANTAS on behalf of Emirates and 10,000 frequent flyer points.   At no point was Mrs Tantrum acknowledged for her efforts with the unwell passenger. She did write to Emirates to suggest some improvements Thank you to Matt for this in-depth review of his Emirates experience.

Have you flown Emirates with a toddler or baby?  How did your experience fare in comparison?

We are always looking for more of your comments and reviews on international airlines to add to our collection of family airline reviews.  You do not need to be a travel writer – or even a writer! – email keri@ourglobetrotters.com with the details you would like to share and we’ll get your story up in print so others can learn from your experiences and make air travel a more manageable reality for families.

5 thoughts on “Flying Emirates with a toddler & baby”