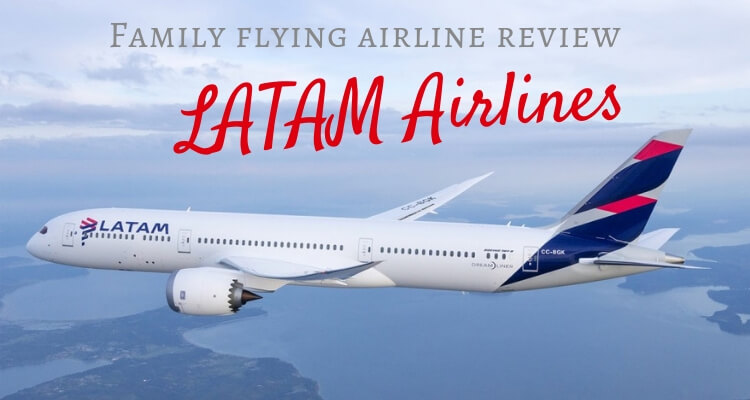 We welcome to the blog today Thais from World Trip Diary, sharing here family experience flying with LATAM Airlines.  The largest Latin American airlines group based out of Chile, the airline services Brazil, Argentina, Peru, Colombia, Ecuador, Paraguay and beyond.

We’ve finished our round-the-world trip a few months ago. Before that, we’ve travelled for a year around the Americas, a few months in New Zealand, Japan and Europe. It was me, my husband and 4 kids.

Our longest leg was between NZ and Brazil. It was our first and our last with them, but we’ve also had quite a few smaller trips ranging from 1 to 8 hours in between those two.

We chose LATAM because it was the cheapest option. When you fly with 4 kids, you don’t have much choice. We’d flown LATAM before and it wasn’t horrible, so we went with it. A long leg from Auckland (NZ) to Santiago (Chile) of around 17 hours, and one short leg from Santiago to Sao Paulo (around 4 hours). 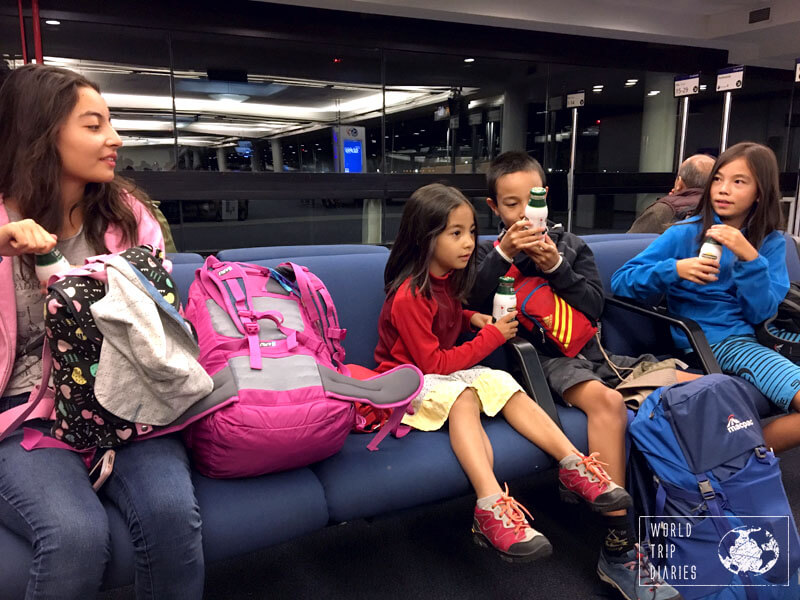 Booking (and cancellations) with LATAM Airlines

Booking was super easy, super quick. We had to call them to ask for my oldest’s (she was 12, so paying as an adult) meal to be changed into a child meal, as we didn’t have that option online.

After a while, closer to our trip, they decided to have a strike and started cancelling a bunch of the flights. We tried calling but, as expected, after 2 hours waiting on the phone, we gave up and decided to go straight to the airport.

The person there assured us that the first flight would be just as scheduled, but the second wouldn’t so they would put us in a hotel until the new flight, which should be on the next day. And he offered us a taxi voucher back home – but as we were driving, we declined.

Bags and other things

The kids and I were travelling carry-on only but my husband had one big backpack with the stuff we couldn’t take with us. They were fine, except for once or twice when they did make us weight the carry-on. It was above the weight, but once we took out the jackets and the book, it was fine (you can carry your carry-on weighing up to 7 kg, a small bag, a jacket or coat, and a book).

We don’t travel with special kids gear because they take too much space in our luggage and our kids were a little bit over that age. The youngest was 3, and already an experienced traveler, so she didn’t need much.

Check-in and seat selection on LATAM

We were also able to check-in online and select the seats we wanted, no extra fee, but when the online check-in wasn’t working, we had real problems. It was the only time we had a problem with them, but it was just the worst hours we’ve had in an airport.

LIKE THIS? WHY NOT TRY
Flying Qatar Airways with Kids 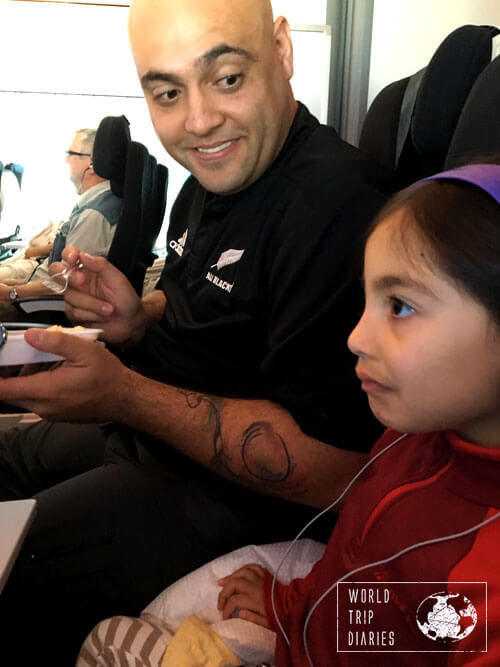 On our flight back to NZ, the website wasn’t working and the people on the phone said they couldn’t do it. Even though we arrived around 5 hours earlier at the check-in because we knew we needed the seats to be together, it wasn’t possible. We’ve never faced ruder people at the check-in counter than that day.

One person pushed to the other and they managed to make our check-in wrong and we had to redo it, talk to the manager, and still, they didn’t care. So one person pushed to the other and we were in the airplane, saying that we wouldn’t sit unless they put at least the kids all together. We delayed the flight for over an hour, but the flight staff was extremely helpful and understanding and they managed to put us all together.

So in the end, it worked out. But it was horrible. They were putting kids, even the 4-year-old in the middle of 2 strangers and they all refused to change the seats. It wasn’t their fault, no, but it wasn’t ours either. The company should automatically seat children with adults all the time.

The LATAM aircraft were a fun thing. Sometimes, we were lucky enough and had the Dreamliners, super comfortable, new, with everything working perfectly. But there were times when we got aeroplanes so old we thought they wouldn’t make it. Like those with one big screen in the front row and ashtrays on the seat arm? Yeah. Super old school. 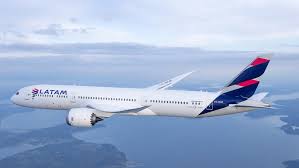 Longer flights usually have the best aircraft, so for the longer legs, we had good airplanes.

Their selection of kids’ movies and games is pretty good, and it kept my kids well entertained for the flights. They also received – sometimes – an activity pack. It could be a backpack with an activity book, pencils, and stickers (on the good times) or a sad pin was given at the end of the flight (on the bad times).

And with the check-in opening hours or bag drop-in times. It varied heavily and once, we had to fight them to accept our bag (sure, it was 12 hours before the flight, but we had already talked to them on the phone and by e-mail, and they said we could just drop the bag in when we arrived at the airport). 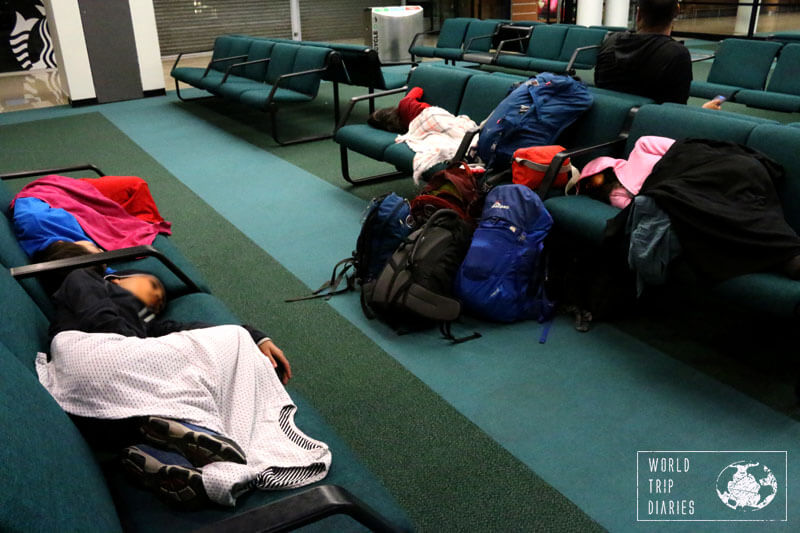 Kids meals (or special meals, like vegetarian) need to be ordered at least 24 hours prior to the flight. If your kid is over 12 and still wants a child meal, you’ll probably have to give them a call. They’re often stuff kids tend to enjoy, like nuggets, pancakes, fruits, spaghetti.

They also ran around 3 times through the flight to give out drinks and a snack, but if you get hungry, you can always ask for something and they’re most likely to say yes.

LANPASS is their frequent flyer program, which is sad. You gain LATAM miles and you can use it with them. Only.

Punctuality and Connections with LATAM Airlines

They were almost always on schedule. Except when they were on strike or overbooked and couldn’t seat kids with their parents.

Since our longer flights were between NZ and Brazil, we had a stopover in Chile. When they delayed our flights, we were able to get hotels for the night without any problem. The hotel meal they offer is pretty sad, though. 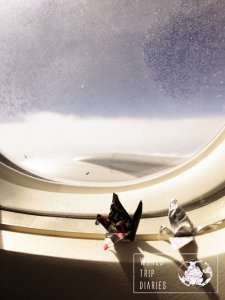 Do we recommend LATAM Airlines for families?

LATAM is a full-service airline. It’s often cheaper than any of the other companies doing this route, and often the cheapest in South American flights (not comparing with the low-cost airlines).

I do believe you get what you pay for.

I would NOT fly with them to Brazil, though, because the staff in Brazil was horrible from start to finish (on the phone, during check-in, even the flight personnel) but we had no problems anywhere else.

I recommend it for families but if the website isn’t working for your online check-in and seat selection, make them select it for you by phone and don’t take no for an answer. Or else, go to the airport the day before to have it done there for you. Just have it done before your flight because, otherwise, it’s likely to be a problem.

Thanks to Thais for sharing her families experience flying with LATAM.  If you would like to share your international airline experience – good or bad – we’d love to hear your story.  Please see our Guest Post Opportunities here.

Disclosures: All opinions in this post are those of the guest author.  This page contains affiliate links that if you make a purchase through may earn us a small commission at no extra cost to you. You can read our full disclosure policy here.