Since our last successful long-haul voyage with Qatar Airways to the U.S., we weren’t hesitant to book with them again for the 9.5-hour flight Doha to Cape Town, after all since this flight Skytrax had voted them World’s Number 1 airline.

Living in Abu Dhabi this, unfortunately, does mean a little fussing for us in the transfers to arrive at Doha.  Despite only needing about 37 minutes in the air you still need to allow 2 hours check-in time, lots of runway taxiing and transfer time making the journey considerably longer door to door – but price-wise it’s immensely competitive!

(NB as at June 2017 this route AUH via DOH to CPT is no longer available due to a diplomatic dispute between Qatar and several Gulf neighbours.)

We are a travelling party of five these days; 2 adults, 2 children and 1 infant.  Having accepted that Master J no longer fits the bassinet, our next best hope was to simply be seated together with the infant on our lap but playing the empty seat tactic where possible.

Qatar’s online system refused to let me pre-book the seats for the DOH-CPT leg despite repeated attempts. A few days prior to flight I tried ringing Qatar Airways to resolve. The customer service representative, in a less than friendly tone, told me I should have just booked the bassinet if I had an infant, mumble, mumble. She could only seat us in two different parts of the plane so we just had to accept this and try and fix it at the airport.

So imagine our shock and surprise of arriving at Abu Dhabi airport to commence this 4-leg journey only to be told my husband and three children were now seated together, but I had been placed on STANDBY!

Yes, all booked on one family ticket, all sharing a name and one of us placed on standby – with an infant that apparently made it on the plane without me!  Here was me frustrated that they couldn’t seat us together in the same cabin, let alone not seated on the same PLANE!!!

The next two hours while we waited for our connection to Doha were, of course, spent making contingency plans (with tired, cranky children already on hand as we headed into the dead of night; another unfortunate think of flying out of the Middle East the vast majority of flights leave between about 10pm and 2am).

If one of us had to stay behind in Doha overnight, who would it be? How would we split up the carry-on bags? What if the next day’s flight was delayed, how would we get transfers and could we physically get out to Stellenbosch for the wedding we were attending in time for the ceremony in our crumpled plane clothes? 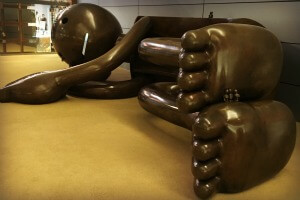 After undertaking the fastest Olympic sprint you have ever seen from one side of Hamad International Airport to the other, carrying three sleeping infants and five carry-ons between us (it’s moments like these I wish I could be arsed asking a complete stranger to photograph us); we get to our transfer desk and we actually had to debate the matter!

Really, there are no seats on this flight together? Really, you can’t bump a single passenger off, look at us with three screaming children who’ve now been woken up at 1am. You think we do this because it’s fun?!!!

Fortunately, one really nice lady took up our cause and plugged away on her computer, and what do you know – an entire set of 5 seats were vacant.  We got not only on the flight but seated together and a spare seat next door to spread the infant over. Ideal seating really but honestly, putting a family through that sort of stress in transit, not acceptable Qatar Airways!!

And the response we got on making an official complaint – “we understand our ground staff resolved the matter and you got on your flight”.  Not the point Qatar Airways, not the point!!!

Onboard experience with Qatar Airways

Once onboard, I must admit the Qatar Airways service is pretty exceptional.  Yes one of the cabin staff did drop an entire glass of gin & tonic on top of me at one point but hey, we were on the plane, we were together, and we’d just settled all our babies off to sleep.  These things happen and she could not have apologized enough (and cue mummy packing tip why you should always pack a spare change of clothes, for everyone.  No, I did not heed my own packing advice on this occasion).

LIKE THIS? WHY NOT TRY
Flying Emirates with a toddler & baby My big disappointment though was the lack of kids facilities on board.  Gone were the Sponge Bob activity packs and snack boxes. In fact, absolutely no activity packs were provided (Thank goodness for our Kidgoz packs– what a lifesaver!). [Update 2017- Qatar have new kids packs! Pop over here to check them out]

We were also very disappointed in the kid’s meals. I didn’t mind so much they were no longer in the nicely presented, re-usable snack box, but a packet of chips, 2 chocolate bars, a chocolate brownie AND a packet of sweets?  Seriously is it that hard to come up with a healthy but appealing kids lunch box for a plane?  Both legs of our flight it was the same rubbish. The Oryx Entertainment system does provide some reasonably good entertainment options, however, if you are happy seeing them just attached to a screen.  Limited music and games (so I’d still take an iPad on long-haul) but quite extensive movies and TV shows.

All-round there are certainly touches that you are flying on a quality airline. Every flight we have taken the aircraft feel brand new, nicely fitted, little touches like wooden floor boards on entry and in the toilets are nice.  The dimming windows are surprisingly good and a bit of a novelty for the kids. Transiting through Hamad International Airport in Doha is one of the more pleasant travelling experiences in the world and kids love spotting the little hidden people in the playgrounds.

The complimentary strollers, as usual, were nowhere to be found when we desperately needed them.

And the return journey on Qatar Airways

As for the return, not nearly as eventful as the outbound. Pre-booked seats were allocated, lounge access granted (thanks again to our trusty Citi credit card!).

We mostly flew through the daytime which I expected to be challenging but, again, with brand new return toys from our Kidgoz packs, my older two were certainly kept entertained – my Miss Z even found another Miss Z her age on the plane and they became inseparable.  Yes this did mean I ended up with 4 kids sitting in my row at one point but they were actually blissfully happy and it passed the time.

Nothing, I repeat nothing, can make a day flight with a 15 month old on your lap go faster – and unfortunately although the spare seat strategy next to Mr Globetrotter did pay off again – his entire row of screens, including reading light and call button, didn’t work (without apology or compensation of any sort) so literally he had nothing to entertain the baby!!

LIKE THIS? WHY NOT TRY
Family Flying Review with LATAM Airlines - New Zealand to Chile

(For more on tackling toddler travel – pop over here. All I can say is, Good Luck) The most tragic end to this story though was the loss of Trunki.  No not one of those plastic suitcases, you should know my feelings on these by now!

Trunki, my son’s beloved, handpicked souvenir cuddly soft elephant from South Africa got left behind on our connecting flight to Abu Dhabi.  2am, 3 sleeping babies, 5 bags, again; you can picture the scene.  Blissfully using Trunki as a pillow, Master L was swept from his seat and never got to say goodbye.

Despite contacting the airport immediately when we got home, despite filling in a lost property form with Qatar Airways, despite a wonderful blogging friend Sarah from Diary of a Lifestyle Mommy working with her former colleagues and friends to locate Trunki, we have finally accepted, he’s gone.

How on earth can a child’s toy disappear from an aircraft like this without a trace?  The mysteries of airlines & airports…. but thanks to those who tried to recover him. (Has anyone ever had a successful toy recovery from a plane incident, I’d love to hear!)

Will we fly Qatar Airways with kids again?

The moral of this story is that customer service staff really are the face of an airline.  What could have been a great airline experience was only OK. A few good staff do not make an airline.  Qatar Airways desperately need to replace their kids’ packs (this has now happened – check our updated review) and look at the quality of their kids’ meals.

Friendlier customer service all around is needed – and please can someone explain how on earth a family group can be only partly seated on a flight with less than an hour before departure.

Sorry, Qatar Airways your family-friendly rating has significantly slipped after this experience…..

Have you recently flown Qatar Airways with kids? How would you rate your experience, and would you recommend them as your number 1 airline of choice?

Further Reading: How does Qatar Airways compare to neighbouring Emirates?