How does Delta Air Lines deliver on this new UK to US route? 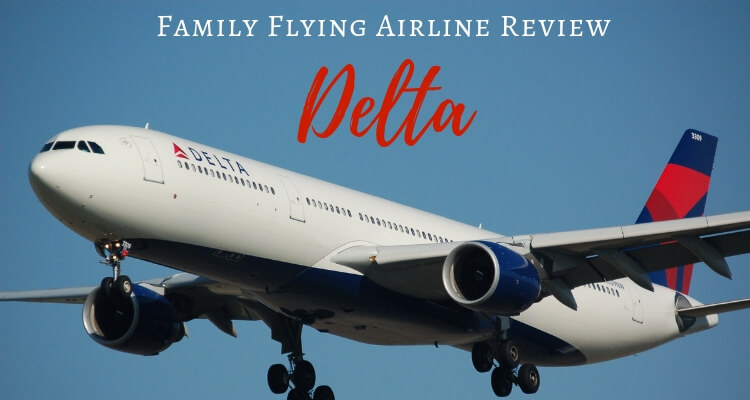 We introduce you today to Cath from Passports & Adventures, sharing her family’s experience flying from Heathrow to Portland using Delta Air Lines – a 4,900km and 11-hour ultra-long-haul challenge for her family of 3.

When we were planning our USA road trip to include Yellowstone National Park and Portland, we originally investigated flying into Yellowstone and out of Portland. But the cost of car hire was so far out of our budget that we had to have a rethink. And we struck lucky as there was a new direct route from London Heathrow into Portland, operated by Delta Airways in conjunction with Virgin Atlantic. So, we chose to fly in and out of Portland, hire a car at the airport and drive to Yellowstone and back again.

We made our initial booking via the Virgin Atlantic website and it was only afterwards we discovered the route was operated by Delta Airways. My husband signed up to their frequent flyer program and it was through this he found an option to upgrade from economy to Premium Economy. For just £100 per person, each way, we were able to upgrade and choose where we wanted to sit in the plane and collect Delta miles at the same time. We also got additional baggage allowance with our upgraded seats.

As mentioned it was a newly opened route, all other options involved at least one stop-over and, as we were travelling with our then three-year-old son, we wanted the quickest and easiest way to get to Portland to start our road trip. All that was left to do was to sit back and wait for our departure date to arrive.

Related Reading:  All our tips for flying long-haul with toddlers

Departure from Heathrow Airport with Delta

We were departing from Heathrow Terminal Three and found it to be a nice terminal with a good choice of restaurants for breakfast (our flight was a lunchtime departure) and enough shops to peruse while we waited. We also found the playroom which allowed our son to run off some steam before our 11-hour flight. 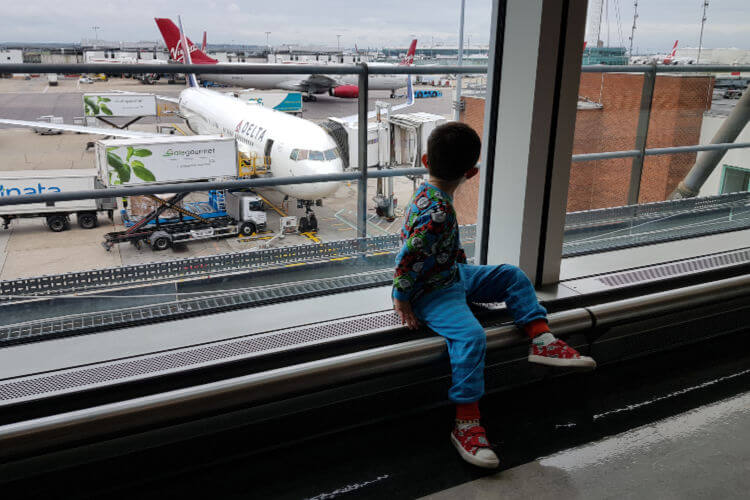 When it came time to board, families with children were invited to board first alongside anyone needing assistance and we elected to get on and get our son comfortable.

We had chosen the three middle seats of a 2-3-2 formation within Premium Economy but had made the mistake of choosing the seats at the partition between premium economy and business class. While we had a ton of legroom and plenty of space to put things on the floor, we had totally forgotten that as the tray table is part of the arm-rest, the arm-rest was static. It didn’t move. More on this later.

Related Reading: 5 Strategies we always use for long-haul flying success

One thing I was really impressed with was the amount of space in the overhead compartments. It almost seemed as if there was enough room for each seat to stow a large cabin suitcase and more bags as well. There was ample storage room, much more than we were ever used to. We got comfortable and started investigating the in-flight entertainment system.

We brought our own noise-cancelling headphones and found a film for our son to watch. There was plenty of choice for both adults and children alike, from TV programs to films. Once everyone was on board, we had an on-time departure and we were away very smoothly. However, for some reason the captain kept the seatbelt sign illuminated for what seemed like a very long time after departure. We had climbed and levelled out and 20 minutes later they were still on. And that’s when we heard those dreaded words “mummy, I need the toilet”.

We panicked. The seatbelt signs were on, but our son was growing desperate. After 5 minutes, and with a twitching three-year-old, my husband pressed the call button to get the attention of one of the flight attendants. Once we explained the problem, she was so understanding saying, “You’ve gotta do what you gotta do to keep your boy happy. Go to the toilets and just take care”.

Within minutes of my husband and son returning, the lights were off. But that flight attendant’s kind words there and then made up for any shortcomings on the flights. And there were two.

As mentioned, the arm-rest being a static one did not lend itself very well to our son catching some sleep, particularly on our red-eye return flight to the UK. However, I cannot lay blame at the airline. It was completely our own fault for forgetting this fact. Let’s just say we’ve learned our lesson and will choose a row back so allow our son to stretch across our legs in future.

LIKE THIS? WHY NOT TRY
Flying British Airways with kids

And despite being at the partition for business class, we were not affected by any noise coming from that part of the cabin nor the crew moving between classes. We were close enough to the toilets but far enough away to not hear any noise from them. 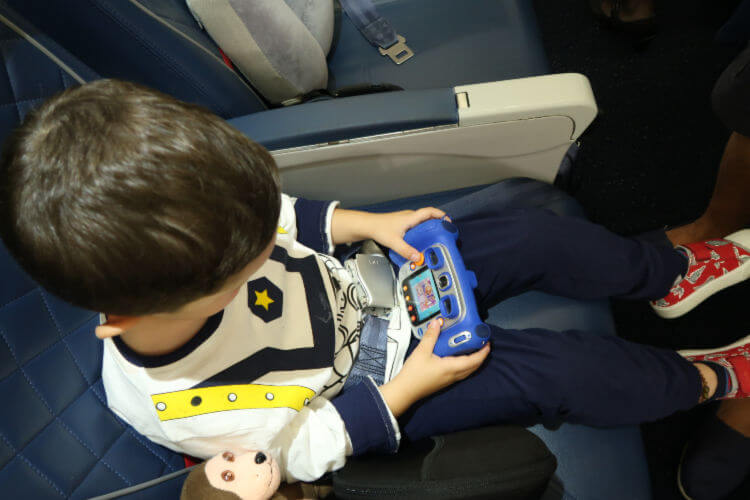 The only other problem we encountered was my entertainment screen on our outbound journey. It kept freezing and resetting the documentary I was watching. The crew tried a number of times to reset it to no avail. And I wasn’t the only passenger whose screen was acting up. On the return flight, we had no problems at all.

Meals & Activities for kids on Delta

Meals on our flights were plentiful but there wasn’t a child option. I can’t remember if there was an option to choose one when making the booking, but it didn’t matter as our son isn’t a fussy eater and ate most of his meals.

Our son was given a small activity pack on the outbound journey which included a colouring book and crayons but not on the return as it was red-eye flight, which was fine with us.

Sleeping and getting comfortable overnight

We did all manage to get some sleep but as mentioned it was hard to get our son comfortable with the static arm-rest. As I wasn’t aware of them at the time, we didn’t use any sleep aids but from what I understand, Delta allow the use of sleep aids for kids, but it is still at the crew’s discretion. We each got a full sleep pack which included earplugs and an eye mask, headphones (which we didn’t need) and a bottle of water. This was in addition to pillows and blankets.

Overall, I cannot fault the service and crew of our first experience long-haul flying with our son on an America airline. We’ve flown long-haul with a European airline before and they never fail to meet and exceed expectations, so we were apprehensive as to what to expect with Delta. But that flight attendant alone was what made the experience a very pleasant one. She could have made us wait until the captain turned the seal belt signs off, but she didn’t. She was so understanding and nice and was a credit to them. I was sorry I didn’t get her name before we disembarked to let the airline know.

LIKE THIS? WHY NOT TRY
Air New Zealand Family Flying Airline Review

The rest of the crew were lovely too, and the captain even sent down some cards and a Delta pin for our son with his flight logbook, which we always get signed on every flight. No other captain has sent goodies down when returning the book. And both captains left lovely messages for our son.

We had an on-time departure for both sets of flights and arrived ahead of schedule as well. I cannot fault Delta at any stage, despite the screen problems I had on the outbound journey. And as mentioned, the sleeping limitation was down to us and was no fault of the airlines. We had a very pleasant first experience of using Delta Airlines, made even better by that one member of crew going above and beyond in her understanding of our predicament. I wouldn’t hesitate to book another trip with Delta in the future.

About the Writer – Cath Jordan

Cath is an Irish expat who now lives in Portugal with her husband and son. A former scientist, she gave up working when they emigrated south from the UK. She is a family travel and lifestyle blogger and hopes that, through her blog, they will inspire more families to travel, especially with the toddlers in tow. As a family, they love travelling and have started working their way through their family travel bucket list.

Cath writes about their family travels and experiences on her blog Passports and Adventures.  you can keep up with their adventures here:

Thanks to Cath for sharing her long-haul adventure – what a pleasant surprise to hear about an American-based airline doing something RIGHT!!  Do you have a long-haul adventure with kids that you’d like to share?  We’d love to hear your stories – good or bad – to help other parents plan their overseas adventures with kids – our guest guidelines are here.

Disclosures:  All opinions expressed are those of the guest author.  This page contains affiliate links that may earn us a small commission at no additional cost to you. You can read our full disclosure policy here.