Is this the new revolution in plane sleep for kids? 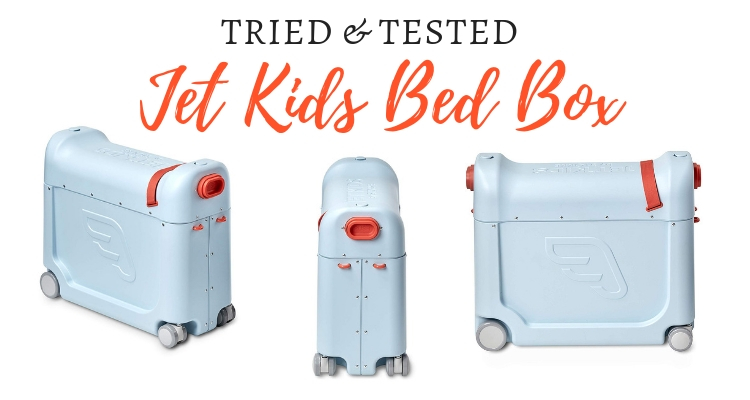 Hands up who’s taken an overnight flight in Economy?

Not that comfortable, right?  I’ll confess I can sleep on just about any mode of transport sitting bolt upright, trains, buses, boats.  But planes, I just want to get horizontal!  However, even more important than me getting sleep is most definitely seeing the little ones nod off so we can arrive at our destination fresh.

We are frequent flyers from the Middle East to both Australia and North America which means dealing with 10 to 16-hour flights pretty regularly. Our key to surviving these flights is to go overnight when the kids are already sleepy (you can see more of our flying strategies here).

This theory has worked really well with infants, but what about as they grow older, and longer? Can they get to sleep in an ordinary economy seat?

A Plane Bed for Kids?

We’ve excitedly watched the development over the past couple of years of the Bed Box. When the team at Jet Kids reached out to us to trial their new innovation we jumped at the chance.  Our first big long haul test was an 11-hour overnight flight AUH to PER so plenty of time to put it through its paces.

(Since we conducted this review the product is now branded by Stokke and distributed internationally in a variety of colours. The product itself is still as described in this review, however, we have noted they are trying to rebrand it as a “RideBox”).

This post is part of our Tried & Tested family travel product review series.  Come and check out all our favourites from travel strollers to infant cots on the move.

How does the Bed Box work?

Our tester for this review was our big girl Miss Z, who was 7 years old and 120cm tall at the time of flying. The packaging and arrival

Bed Box is currently available with blue and red trim, the box itself is light grey. You can purchase from the r Now Available on Amazon

The instructions are inside the box which makes step one a little tricky – getting the lid off!  But it was fairly self-explanatory and construction didn’t take long.  Inside the packaging, there are also stickers you can decorate your bed box with – or of course kids could add their own personal touches to it!  The box is otherwise quite clinical looking.

The package is surprisingly light and without anything other than the mattress in it, pretty easy to carry.  If you were to fill it with toys, I imagine it would become considerably more challenging to carry.

Bed Box as a roll-along suitcase

Since its arrival in our household, it’s received a great deal of attention from the Globetrotters, gleefully gliding across our tile floors with it, pulling each other, packing their toys (funnily enough playing aeroplanes and holidays is a game in our house!)

LIKE THIS? WHY NOT TRY
Best Car Seat Travel Bags in 2020

I will admit to being sceptical using it as a pull along as we’ve become quite adapted to being a backpacking family rather than roller bag (yes I’m still going on about THAT HOLIDAY where Trunki caused us so many woes!!)

But the kids really enjoyed taking turns pulling each other through the airport. At 7, our eldest was mature enough to avoid crashing it into other passengers and actually DID ride it the whole way from taxi to getting on board, and drag it herself down the aisle to our seats.  (Had my Masters 3 & 5 had the controls I am not sure it would have been as smooth sailing the whole way, nor could I have dragged the case and pushed the stroller simultaneously without some difficulty).

Use leg power or have someone pull you

Ride it right to the plane door

The case has a small handle attached, as well as a longer strap that can be used to pull it along, or attached to either end of the case as a carry strap.

The wheels work very easily – though perhaps too easily.  There is no form of wheel brakes for when you want the case to remain stationary as we discovered in the cab to the airport. This does mean it glides seamlessly along shiny airport floors, however…

How to construct the BedBox and bring on board the plane

It is fairly easy to construct, but of course, like any new product do practice at home before you go!

It easily fits stowed in the overhead locker for take off, then after the seat belt sign comes off, you can pop it into action.

The lid pops off quite easily by pressing the two side buttons, then flips over to become a flat surface and slides out to become the base for your legs.  You then roll out a thin mattress (provided) on top of the lid to make a bed.  The mattress comes with side flaps, but if I’m honest we found these pretty superfluous.

Once your ‘bed’ is made kiddy hops in then you put the blanket on with the seat belt over the top.

As fully extended as we could make the mattress

All set up ready to sleep

The carry strap can be used to secure the box to the chair, but to be honest, as this involved me leaning over the aisle and disturbing others for even longer, I chose not to. I also found that on board our aircraft, there was very little room for me to extend the lid between the seat and chair in front.  Due to this, I couldn’t get the lid to lock fully into place, in either direction I put it.

Image from @Jet Kids how it should have been secured

It didn’t stay in one spot throughout the flight
LIKE THIS? WHY NOT TRY
5 fun & educational travel gifts for kids

Several times during the flight the box, therefore, started contracting or rolling out of place.  Had I not been awake and seen this, we would have ended up in an awkward mess and potentially blocking the aisle.  I wish I had spent the time securing it better as several times during the flight it moved and I had to stick a leg out to stop it rolling.

I also mistakenly had it set up on an aisle seat.  Etihad doesn’t appear to have any published rules about Bed Box or the use of any sleeping devices, but I have since discovered that they should only be used in a window or center seat – this will severely restrict families on seating choice (see more on safety below).

Sleeping on board with a Bed Box

The all-important test, did it make a difference to sleeping comfort on the plane?

She could not sleep lying flat, but in an upright position could at least stretch her legs in front of her instead of over her brothers like she normally would.  I think this did result in more overall sleep for all the kids as they weren’t as on top of each other.  She slept the majority of the 11-hour flight.

Are Bed Boxes airline compliant? Are they safe?

Some airlines are now rejecting this device and other similar products from being used in the cabin, citing safety reasons.

This is the official Jet Kids opinion on whether they are safe to use – we recommend you continue to monitor and check with your individual airline if they will be accepted for use on board.  At worse, it’s still a kid carry on suitcase and will need to be stowed overhead throughout the flight if not allowed to be used as a bed.

Do note, for obvious reasons they should not be used in exit rows – here is a good explanation provided by Singapore Airlines.

Which airlines allow the Bed Box on board?

We are aware that the following airlines have issued statements or updated policies recently regarding their use:

Bed Box on Emirates – not clear at all! But passengers from the UAE have reported being denied.

Bed Box on Virgin Australia – may be used on the window seat of small aircraft or middle and centre seats of A330 or B777 aircraft.

Sleep Devices on Asiana – reported that they would not accept any sleep aid products in Sept 2018.

LIKE THIS? WHY NOT TRY
Choosing the best nursing cover for travel (2020 buying guide)

We are a very experienced flying family. Well over a million air miles between us and the Jet Kids was good – but I wouldn’t say overly necessary for all flyers.

Without a doubt it made Miss Z’s flight more comfortable, adding not only to her sleep but her siblings.  But the annoyances of having it move around during the flight and what to do with it after we landed and multiple extra stops, I am not sure the sleeping benefits outweighed overall transit inconveniences on a long international trip.  We did still end up bringing backpacks – our airline allowed the extra item but many will not.

If you have a long, direct flight and somewhere to store it at your destination, then yes I would recommend you look into it.  We may use it for further long-haul flights depending on the circumstances, but would not invest in one for all three kids; firstly because it would not be allowed per current safety recommendations, but also because space is such a precious issue when we travel, I do still prefer back backs than wheely cases.

That said Miss Z loved it and seems quite attached!! I guess the pros of some other competing products are they are much smaller to bring with you.  Although the Bed Box construction is exceptionally light for hard plastic – [easyazon_link identifier=”B00MQCZOBU” locale=”US” tag=”babyglob-20″]the lightest of the blowup pillow products[/easyazon_link] weighs in at 0.3kgs (lbs) and most definitely fits in a handbag – I know travelling with kids this is an essential element to consider.

The fact this is also a novelty item for kids as well does pay off. Depends I think largely if you will get further use out of the box and have somewhere to stow it between connections. We didn’t take our Bed Box out on day trips after we landed making the kid’s backpacks, in fact, more helpful and the box took up considerable car space.

Have you tried the Bed Box or similar products? Have they been a help or hindrance to your travels? 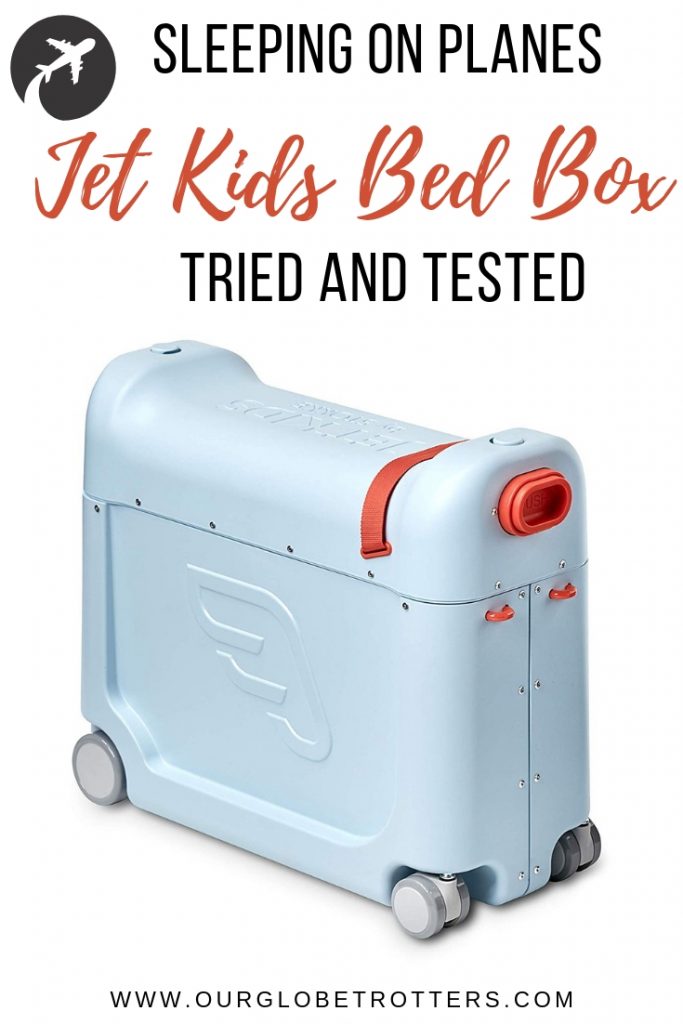 Disclosures: We were provided with a Bed Box by Jet Kids for the purpose of conducting an honest review, we have not been paid for this and all opinions are our own. This site contains affiliate links to other products which may earn us a small commission, thank you. Our full disclosure policy can be found here.