Our Guest Blogger this week is Marianne Rogerson from Mum on the Move providing us with her recent adventures flying long-haul with kids on British Airways. 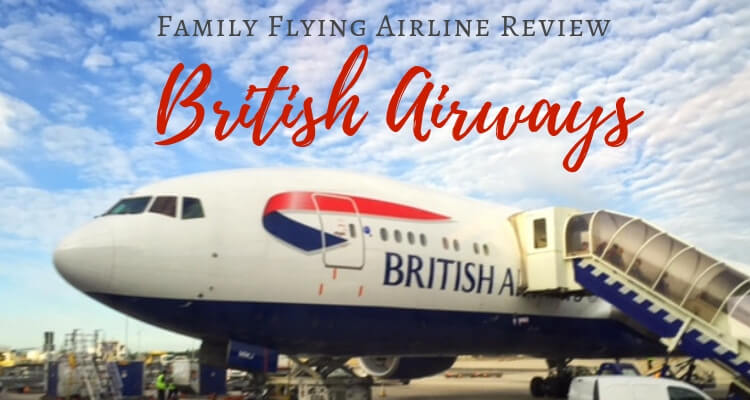 We recently flew British Airways from Hong Kong to London, travelling as a family of four with a four-year-old girl and two-year-old boy. We live in Hong Kong, and our family are all based back in the U.K, so this is an annual pilgrimage for us. The flight time is around twelve and a half hours.

I think it’s always worth checking the price differentiation between classes when booking, because you will sometimes find that there isn’t much in it, or that you can upgrade with miles quite cheaply. A flight in Premium Economy (or if you’re really blessed, Business) can be so much more comfortable, particularly if you are flying long haul.

We usually choose to fly overnight when flying back to the UK. The flights leave at around 11pm, and we try to keep the kids up as late as possible so that they will then sleep for as long as possible during the twelve-hour flight. These flights arrive into London at around 5am, which does mean that everybody has been up since 3am or earlier local time, but we find that if you can keep everyone going until the evening and have an early night and a good night’s sleep, then jet lag for the rest of the holiday is minimal.

The outbound journey with British Airways HKG to LHR

Our journey this time around didn’t get off to a good start. My 4-year old threw up all over the taxi on the way to the airport and then again in the check-in area, so we were anticipating a terrible flight (luckily she wasn’t sick again). Then our flight was delayed by two hours until 1am, which kind of messed up our plan to keep the kids up until we boarded the plane. Luckily they both went off to sleep in the departure lounge, so at least the delay wasn’t made worse by tired, grumpy children.

LIKE THIS? WHY NOT TRY
Surviving an overnight flight with kids on Norwegian

Once on board, my first impression was good – the cabin was small, and the seats were wider and with enough extra leg room that we felt justified in our upgrade! Each seat had an amenities pack with socks, earplugs, toothbrush and eye mask alongside the blanket and cushion. What was most appreciated though was the noise cancelling headphones. Obviously, these weren’t as effective as my husband’s fancy Bose pair, but compared to the normal headphones you get on a plane, they were amazing.

The only thing that disappointed was the size of the in-flight entertainment screen – one of the smallest I have seen on a plane in a while.  However, it is worth noting that we were flying on a Boeing 777 with the old cabin design. Our return journey was on an A380 with the newer cabin design, and the screen was much bigger.

Quality of Cabin Crew on board British Airways

But what really stood out for me on the flight was the service of the crew. We had who I believe to be the nicest air stewardess in the history of air stewardesses. She could not do enough for us.

When we boarded the plane, my 2 ½-year-old woke up and was none too impressed to be plonked in an aeroplane seat to be strapped in. Instead of insisting that we make him sit down, I was told to take my time and help him settle, and she was happy for him to sit on my lap right up until the last possible moment.

She also went off in search of a goody bag for him to try to placate him (apparently they don’t usually hand these out on the ‘home’ journey, which I thought was strange – and it was actually an activity book that was probably only suitable for ages 6 and above), and found an extra large cushion from business class to make him more comfy.

I had forgotten to order the special child meals for the kids, so at breakfast time our friendly air stewardess raided the business class kitchen to find some extra croissants for them. She also made a point of coming to tell us during the flight that there was a basket of snacks in the galley that we could help ourselves to.

LIKE THIS? WHY NOT TRY
What to expect flying long-haul with kids on budget airline WOW air

Every time she passed by our seats – even in the middle of the meal service – she made a point to stop and have a little chat with my kids and me. I did find out during one of these chats that she herself had one-year-old twins, so I guess she is no stranger to the stresses of looking after children. But she certainly made my life much easier on the plane.

Learn more about exploring London with your kids here

The return flight LHR to HKG with British Airways

On our return journey, unfortunately, didn’t have quite the same level of service, but the cabin crew were still jolly and upbeat, and extremely helpful. Unfortunately, the toddler sitting behind us had a complete meltdown at 33,000 feet, screaming like he was being tortured for over twenty minutes. The crew were very sweet with the parents (who were obviously receiving dagger stares from the entire cabin who were now wide awake in the middle of the night), and eventually suggested that they come down the back of the plane with them for a while until the little boy settled.

My only issue with the return journey was our seating arrangements. Although we were travelling as a family of four, with two children under age 5, we were seated with two seats together and two separate seats. This meant that either my two-year-old or four-year-old had to sit alone, next to a stranger. Which wasn’t going to happen.

Moral of the story – check in online early. Unfortunately, that wasn’t possible for us this time, but I will definitely bear this in mind next time.

Thanks to Marianne for her thoughtful review of their experience flying British Airways with kids.  If you would like to see more of Marianne’s adventures with her family, don’t forget to come and check out Mum on the Move! Check our further flying adventures on British Airways with kids – Atlanta to Zurich via LHR here!