Bombings, malaria, civil war, earthquakes and evacuations. All in a day’s job perhaps for our military men and women, but how did an Aussie accountant and mum of two find herself dealing with these things as part of her job?

I am proud to introduce you to Julie Cooper who with the support of husband Sean, daughter Ali and son Lucas has undertaken a slightly less convenient expat journey through some of the world’s most forbidding locations as a Public Financial Management and Performance Improvement Specialist. Her specialty is mainly in implementing public financial management systems in post conflict countries but she also specializes in performance management.

Since 2001, Julie and her family have lived on and off overseas, together and apart as conditions have allowed. From the tiny island paradise of Vanuatu to the dust-filled streets of Juba, parenting on the road with hardship postings has thrown up many challenges that most families could not comprehend.

Julie and Sean share their less than conventional expat parenting tale with Our Globetrotters (OG).

OG: You have spent much of the last 14 years on the road, can you take us back to where it all began and your first overseas posting?

J: I was working in Canberra as an independent contractor in 2001 when I was offered a short term contract position in Vanuatu (located about 1500 miles from Sydney, Australia, in the Pacific Ocean).  We thought this could lead to some interesting work down the track and it was a peaceful, idyllic location so I happily took the position. Ali was only two and Lucas was 14 so all of us relocated to Vanuatu while I worked for three months. The contract started in late November so it didn’t interrupt Lucas’ schooling.

S: From the time Ali was born we had already made the decision that I would become Ali and Lucas’ primary carer so there was really no parenting decisions needed at this stage.    Two years later though, Julie was offered another posting in Vanuatu but this time Lucas was part way through completing year 11 of high school  (the penultimate year in Australia), so we had to put him into a boarding school for three months so he could complete the school year.

J: This was a very difficult decision to make, he was trying to be brave about it and said he was happy to do it – it gave him more time to hang out with his friends – but I don’t think he enjoyed the restrictions they placed on the boys.  Their rooms were tiny and it felt dreadful leaving him behind but he finished the year off then joined us again.

S: When he did come out to join us it was difficult for him as there really wasn’t much for him to do, great for young families as there was plenty to entertain young children but not really suited to teenage boys. Ali got to start kindergarten while we were at Bodvilla International School and it really was an enjoyable time.  Everything we needed was within walking distance and Julie was close enough to walk home for lunch.

LIKE THIS? WHY NOT TRY
Exploring Phnom Penh Cambodia with Kids

OG: Sounds ideal but I’m sure island life had its downsides?

J: It really was quite a remote location, there are no big hospitals, only small clinics; you are about a four-hour flight back to the nearest large cities of Brisbane or Sydney if anything goes wrong.

S: There was a big expat community and beautiful beaches but everything was very expensive.  The cost of living is extremely high as absolutely everything needs to be imported. During our second stin,t an earthquake hit the island quite badly. It was 7.3 on the Richter scale and damaged the main bridge in to town making it unstable.  The tremors continued for over a week. As we had to move into an expensive hotel it was not suitable for family living so I took Lucas and Ali back to Australia. Julie stayed on in the hotel, with her mother who was visiting long term, until the project ended.

OG: This obviously gave you the taste for expat life. So what happened next?

J: The work in Vanuatu was only a fixed term contract so with no further opportunities pre-eminent, we assumed it would be back to Canberra but before leaving I was offered a further opportunity leading a team in  Kabul, Afghanistan, initially for 4 months in 2004.  We assumed I would be out there for a few months, make some good money (with uplifts and danger pay, tax free) then come back.  Sean would stay home with the kids while Lucas finished his final year of high school.

From a career perspective, it would be an invaluable move.  I didn’t want to spend the rest of my career teaching big entities how to prepare financial statements.  For every year you work in difficult hardship postings it can have a multiplier effect on your career. I was a late starter so this opportunity would really give me the boost I needed with a top international organization.

Related reading: What should you be seeking in an expat remuneration package for families?

OG: What was everyday life like in Kabul? Was it considered ‘safe’ for families?

J: You could see that a reasonable city was once there. Aside from the abandoned tanks on the side of the airport (and all over the city) it was clear that there was a functioning city underneath, infrastructure existed it had just been badly damaged by years of Taliban rule and the war.  In the years immediately after the war against terrorism in 2002-03 and after the Taliban had been overthrown, there were huge aid programs put in place and a lot of foreign workers, as well as locals returning to rebuild the economy.  It was probably a lot safer back in 2004 than it is today.

LIKE THIS? WHY NOT TRY
Exploring WA's South West - a spectacular 9-day road trip from Perth

We had a security detail and everywhere we went we had a driver and armed guard, however, there were restrictions on which bars and restaurants we could go to.  Public places had to be pre-assessed as safe for foreign workers.  There was also an approved list of supermarkets we could go to that sold Western branded products – you could even get alcohol and bacon from some shops (this has since become much more difficult). It otherwise did feel quite ‘safe’.

Afghanistan has a traditional Muslim culture and respecting their customs and traditions was important. However, at the time, foreigners were very welcome and any lapse in protocol was largely tolerated. I didn’t need to be completely covered at work but I would always take a head scarf with me.

OG: How did the family deal with separation during the time in Afghanistan ?

S: Julie did come back after a few months but more work came up so she moved out there more permanently during 2004.  This was difficult for the family, due to the time differences it was hard to talk every day and when Julie did come home there was jet lag to deal with.  Lucas was still completing high school so the rest of us remained in Canberra until the end of 2004.

J: There were international schools available in Kabul and some people did have their children out there with them. Sean and Ali were able to visit visited me in Kabul during school holidays but we felt with Ali’s fair hair and the quality of schooling she would receive, being in Kabul was far too much of a risk.  Medicines and health were also a concern in Kabul.  You basically had to ‘self treat’ if anything went wrong, if you felt sick you would Google what you needed and send the houseboy to get it for you.

S: Dubai was an up and coming Middle East city at this time, only 2.45 hours flight to Kabul and in the same time zone so we decided Ali and I would base ourselves there.  It was much easier to talk on the phone and Skype and Julie could visit more regularly.  Ali was able to enroll in an international school and we rented a hotel apartment.

J: This did work well for Sean and Ali but Lucas, even though he had finished school was a long way away so it was difficult for him and for us.

LIKE THIS? WHY NOT TRY
Fun Things to do in Albany, Western Australia

S: This arrangement worked well for a year but then we were facing a significant rent increase; in the UAE it’s quite standard for a year’s rent to be asked for in advance.  With no certainty on how much longer Julie’s contract would go on for, Ali and I headed back to Canberra again and she restarted school in Australia.

OG: How did Ali cope with all the moving around and separation at such a young age?

S: She was incredibly worldly and understood exactly where she was. Most of her classmates, even her teachers in Canberra had no idea where Dubai was – they would get it confused with Mumbai!  But she really did take it all in her stride at this age, she was very good with making friends.

J: When I asked her how she deals with it she said “I just don’t think about it, that’s how I deal with it”.  We were able to chat on the internet every day, and you would constantly touch base throughout the day, even just short messages from either end to know everything was ok. I was also able to take very frequent breaks from Kabul so we were never apart for more than 4 weeks at a time.

OG: What brought an end to your time in Afghanistan ?

J: This type of work tends to attract young people looking for adventure, but they really need older workers with a lot of experience under their belts, which usually means they have older grown-up children – or they are divorcees!  Its quite unusual to come across anyone with young families to consider.    My bosses knew I was after a family posting so when an opportunity came up to move to Cairo, Egypt all together, we took it.

By the time I left Afghanistan though we had implemented a treasury system that worked, and is still being used today, so I am thankful that my time there felt successful and worth the family sacrifices.

This brings to an end, part one of Sean and Julie’s amazing story.  Next time, find out where the loneliest place in the world was to have Christmas,  a story to make you think twice before romanticizing the Nile and some insight into where real danger can lie in the world.  Packed with some great tips as well for any families looking to undertake hardship postings join us again for the conclusion to this adventure.

This post is part of our series on Expat Parenting – come and check out our other stories from the copper belt of Africa to the remote island of St Lucia. 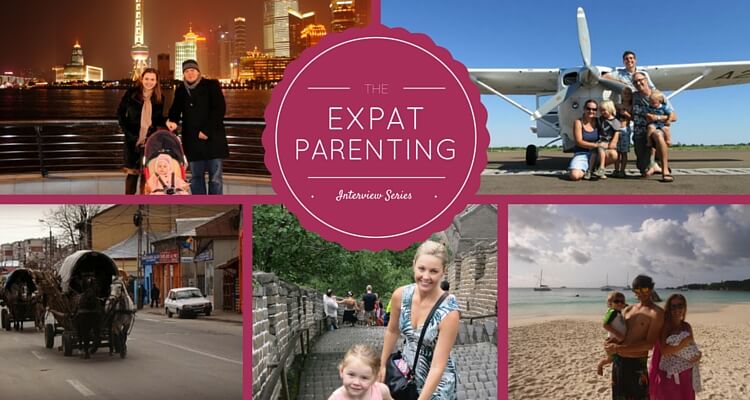