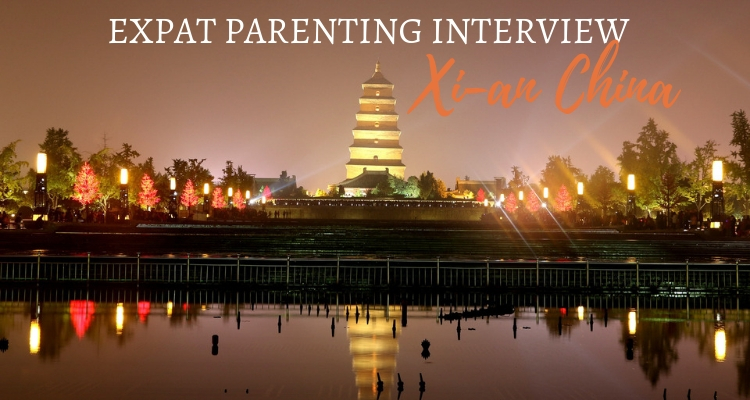 Our final expat parenting interview this year is with Nicole Webb, currently living in Xi’an, China with her husband and four-year-old daughter Ava, after an initial overseas posting to Hong Kong 5 years ago.

I first came across Nicole via My Expat Family link up, and she quickly became one of my favourite expat bloggers at Mint Mocha Musings.  It’s fair to say her expat journey as a hoteliers wife in both Hong Kong and now Mainland China has certainly given her a lot of material to work with!!

But her bubbly personality also clearly comes through in her writing and through gritted teeth at times, there’s still a smile as she tackles the daily grind of expat parenting in China. Nicole takes us back to where her expat journey began, then through the emotions and challenges of this unique expat life.

OG: Where did your expat story start?

NW: I was born in the ‘Land of the Long White Cloud’ aka New Zealand, where life as a child was pretty idyllic for a girl who thought she was a mermaid and ate oysters off the rocks! When I was a teenager, the sunshine and surf of the Gold Coast lured our family to Australia, where I spent the next 23 years as an Aussie girl.

I met my husband on a blind date (I swore would be my last) on a cool, rainy night in Sydney. He’s British and had originally come to Australia as a backpacker before getting sponsorship to stay and continue working in the hotel industry… then Hong Kong then came knocking in 2010.  Our daughter was born in Hong Kong; in fact we found out we were pregnant the same week we found out we were moving to Hong Kong – a double whammy! Let’s just say my heart was in my mouth about what lay ahead. The absolute unknown!

After ten years as a Journalist/Reporter/News Reader at Sky News Australia, as much as I loved my job and we had a great life Down Under, when my husband was offered a job at the W Hotel in Hong Kong, we decided it was the perfect time to do that thing called ‘Carpe Diem!’ And that we did…

OG: What were your first impressions on arriving in Hong Kong?

NW: As civilized as Hong Kong is, it was still a complete culture shock. Everything from the climate to the culture, food and fast pace of the city was alien, not to mention the smells of the Orient wafting from the maze of laneways, bursting at the seams. Being pregnant and unemployed in a foreign city was overwhelming but at the same time, the thrill of a new unexplored city was intoxicating.

LIKE THIS? WHY NOT TRY
Phi Phi Islands Thailand - Ultimate Romantic Paradise?

OG: Tell us more about your experience giving birth in Hong Kong NW: I had Ava in Hong Kong and facilities were second to none. The hospital was not unlike afive-starr hotel. There was even a chef and you could order from a menu each night! (Now that’s service…I didn’t want to leave!) ; ) As for breastfeeding, it wasn’t overly encouraged in Hong Kong and wasn’t as easy to manage as I’ve perhaps seen in other countries. In Mainland China it’s almost non-existent. I’m told formula companies heavily promote their product to new mums. Of cours,e there has been huge controversy over milk powder formula in China in the past and this means many people flock to Hong Kong to stock up on what they believe is a safer product.

In Mainland China, healthcare is nowhere near as advanced. In fact, it’s probably one of the main concerns most expats living there have (apart from the pollution). If you were to get seriously ill, most expats would consider flying out of China for medical care.  Every time I fly back to Hong Kong or home to Australia, a doctor’s visit is top of the list, where we stock up on supplies. Basically, every medicine you could think of is packed in the suitcase, just in case.

OG: What activities and schooling are available for young children? NW: In China, most children go to school around the age of three, thus there are no daycare centres as such. In China, most grandparents will take care of the children until school starts. In Xi’an there are three international schools, one of which my daughter is currently at.  As opposed to Hong Kong, there is a lot more space in Xi’an so plenty of parks around.  One thing I notice in China, is that every shopping centre has a huge play centre on the top floor (Charlie & the Chocolate Factory style)! We are lucky that we have met plenty of expat friends, which means lots of play dates and parties to keep us all sane.

Ava’s international school is an IB (International Baccalaureate) system. Most of the kids are Chinese or Korean (There’s a big Korean population in the city with Samsung’s headquarters based here).  Ava’s one of only two western children in her class. In Xi’an getting into school is relatively straightforward – Hong Kong is a different story; demand far outweighs supply and the schooling system is pretty cutthroat. Kids have interviews as young as two!

(We know this feeling in the UAE too – it might sound insane but if you are any chance of getting your child into the school of choice, it has to be done – OG)

OG: Did you have many interactions with the local community, or do expats mostly keep to themselves? NW: I was extremely fortunate to have two friends in Hong Kong who introduced me to a myriad of other expats. But as is usually the case with expat life, you really need to put yourself out there and step outside your comfort zone. This was no exception. I joined a group of a dozen or so pregnant women and while it was incredibly nerve-wracking, at the end of the day, it’s the best thing I ever did. We were from many different countries and all walks of life….but soon became firm friends. The second time around in Mainland China has been just as scary but equally rewarding. This time I have a four-year-old and her going to school has helped me immensely when it comes to meeting new people.

LIKE THIS? WHY NOT TRY
24 Hours in Taipei for Families

Everyone has a strong sense of community. We are each other’s pseudo-family and the bond between expats is forever strong. For Ava being around so many different nationalities is completely normal. Hearing different accents around her, including many kids that don’t be speak English is all par for the course.

OG: What does a typical expat day look like for you?

NW: For me, I work as a freelancer journalist in all things media, so I’m lucky to work from home. My typical day starts off doing the mad, crazy school run through Xi’an (usually with my eyes closed). It’s chaotic and mind-boggling, to say the least. Once my little girl is safe and sound at school, I hightail it back home for a few hours work. We live in the hotel my husband is General Manager of, so some days we’ll have breakfast together before he is immersed in the day’s intensity that is running a five star hotel in the middle of China!

Living in the hotel means we are lucky enough to have a bubble we can retreat to when the outside world all gets a bit much (not to mention room service for dinner).  It also means we are fortunate enough to get many of our groceries though the hotel because the supermarkets are pretty local! Forget about steak, salmon, cheese, chocolate etc.

OG: What does the typical family unit look like? NW: In Hong Kong, it’s domestic help all the way. It’s almost compulsory for a family to have a live-in helper. It’s affordable and with no daycare options, working families often need the extra help. That said, even expats without children (living in shoe boxes) are swept up in the helper phenomenon. (Who can blame them). In Xi’an the helper is not such a presence. You can get what they call an “Ai Yi” to help, but finding one that speaks English is difficult. On the local front, it’s traditional for grandparents in both cities to play a big role in raising the children.

OG: What have been your biggest challenges as a parent in China?

NW: Probably the language barrier and in turn the healthcare system. A parent’s biggest nightmare is their child getting sick, when it’s in a foreign country and you know the healthcare is dubious, it’s even more stressful. Of course, the pollution only adds to the worry. Thankfully for most of the year it’s low and there’s not much need for concern.

LIKE THIS? WHY NOT TRY
Avoid the Bali crowds; uncovering the hidden gems

Being away from family, grandparents, cousins etc is always tough and of course, watching your little one start a new school is heart wrenching until they settle in.

OG: Your blog has a lot of anecdotal tales about every day life in China, which has been your favourite post on Mint Mocha Musings?

I guess this post intrigued a lot of people, more than I expected (in fact one blog reader requested I write it) A Week in the Life Of…

OG: Despite the ups and downs, it sounds like you have had a fairly positive parenting experience in China, would you recommend it to other parents?

NW: If you are up for an adventure, yes definitely! It’s a great, once in a lifetime experience, that you will certainly never forget!

Xi’an is the real China and a place that teaches you many, many things. Just be prepared for the challenges and know nothing’s forever…. We love that it is so different from anything we’ve ever known – a different culture, different climate, different food, different traditions…

Every day is an adventure, just bring your sense of humour! Certainly couldn’t be more true!  You can read more about Nicole’s adventures over on her Mint Mocha Musings – The Hoteliers Wife: an Expat Affair in China, as well as following her on Facebook – nothing like your daily dose of Chinese humour in your news feed!

What Next?  See where Nicole and her family moved to after Xi’an

Thanks to Nicole for taking time in her busy schedule to talk with Our Globetrotters and share their fabulous and interesting story with our readers.  If you’d like to read more expat interviews, head over to our Global Parenting page where we have been zig-zagging the globe talking to expat parents about the ups and downs of bringing up kids abroad.

Have you lived as an expat in Hong Kong or China? Can you relate to the challenges Nicole raised?